How ST-115 Tells the Truth About your Polished Floor

The specification for a polished concrete floor has been determined by polishing up to certain grit level and attaining a certain gloss level. The main problem is that neither of those two specifications tells you how well the floor has been actually refined. The gloss is easily manipulated by chemicals and a high-speed burnisher for example.

Andy Bowman, founder of Adaptive Concrete Innovations, LLC out of Arkansas, USA and the chair of the CSDA (Concrete Sawing and Drilling Association) commission on polished concrete floors, has together with 16 other experts on surface metrology from 4 different countries worked for over a year to put together a quantifiable measurable metric procedure, parameters and standards for measuring the quality of a polished concrete floor. The group’s work has been called ST-115. The ST-115 document measures the average roughness of the floor, the Ra that measurement in turn relates to nine specified Surface Texture Grades (STG). In the following article Andy Bowman explains what ST-115 is and what it means to the polishing industry. Adaptive Concrete Innovations, LLC is has the global rights for the electronic measurement device, the T-Meter, that measures electronically the Ra, the STG and CSP (Concrete Surface Profile) 1-6 for floor preparation.

What is this document and what does it mean to the polishing industry?
Surface finishing is a multidisciplinary activity intended to tailor the properties of the surfaces so that their function and serviceability can be improved. Since polished concrete was born, it was important to have a quantifiable standard for the level of finish that was being produced. The first best practices documents described the process of polishing and broke out the various levels of grinding and began with heavy grit metal bonds that were operated in a wet environment. The refinement process was not only followed by the polishing industry, it was also understood that sequencing steps would need to follow the selected starting grit in order to have a clean, scratch free finish. The polished floors that were produced with this basic concept provided a consistent finish and a relatively predictable outcome.
When the industry evolved into a completely dry polishing system, as an alternative way to polish concrete, there was a similar progressive sequence of steps that also focused on a high degree of refinement and produced a comparative and predictable finish as the older polishing systems had proven. Many of the early discussions about the quality of finishes were always settled by using a gloss meter. This quantitative measurement would give end users a quantifiable standard to write into a polishing specification and the facility was virtually guaranteed to get two things at once. The first was a highly processed and refined floor and the second was a gloss level that was easy to achieve by selecting a resin bonded abrasive tool that could increase the gloss level if higher progressive grits were ran over the last polishing grit selected.
Over the past six to seven years, end users have been experiencing sustainability issues never previously encountered. Like other construction industry trades, having a competitive advantage is key to winning competitive bids. Many companies are extremely successful at value engineering their process or maximizing efficiencies with innovative attachments and proprietary tools, or simply they just have a more organized labour force. Unfortunately, the construction trades are also represented by contractors that do not focus on turning over a quality project and racing their competition straight to the bottom on price and quality. Unfortunately, the polishing industry is no different. In today’s polished concrete world, there is a wide range of systems and equipment and just as many varying types of specially formulated chemicals and abrasives for the polishing industry with only one quantitative standard, the gloss meter. No fault to the gloss meter, some of the topical concrete polishing sealers have the ability to cover heavy metal bond scratches, change the texture from rough to smooth, and even increase the gloss number on projects that were tested with failing readings.
These tricks of the trade have caused end users to spend much more than expected on maintenance systems to keep their floors looking as good as the day they were finished. These floors are not holding their own. Why? Surface refinement has been ignored by processes that endorse skipping progressive steps and not properly chasing the scratch out of the surface. Function and sustainability are the positive attributes of polished concrete and our industry is working hard to provide clear language about the quality of a polished concrete surface beyond its ability to record scattered light with a gloss meter. 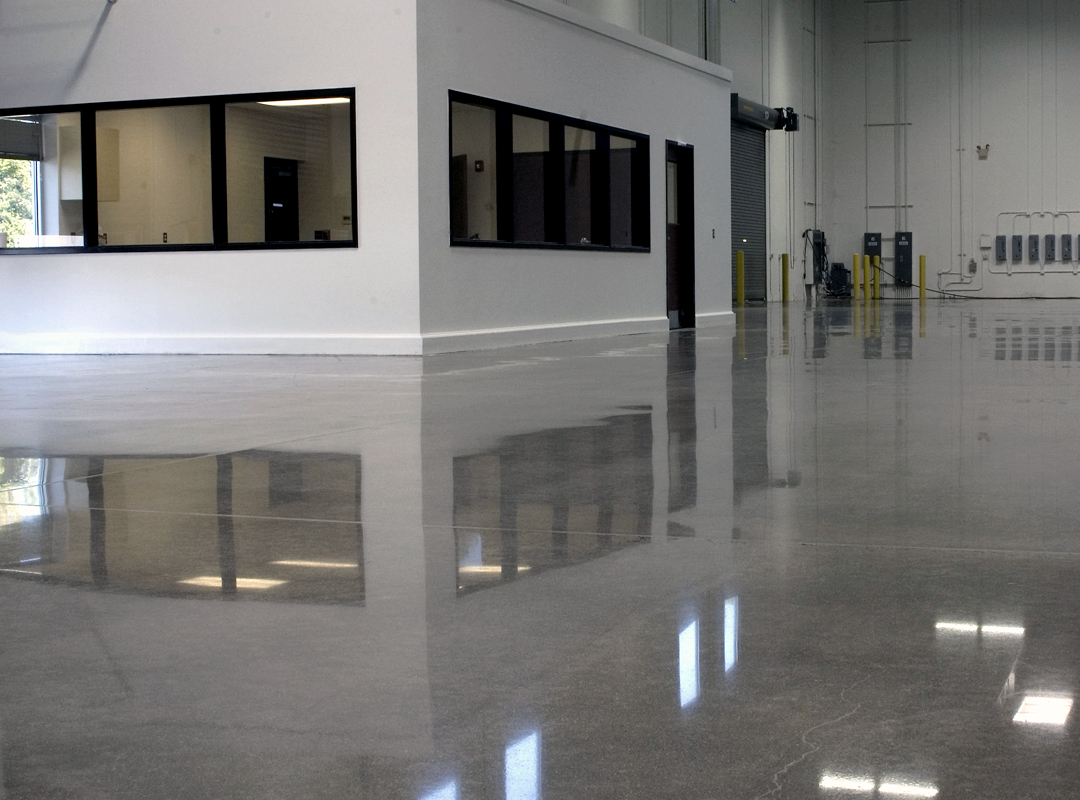 The ST-115 Standard
ST115 is a standard for the polishing industry that was adopted by the Concrete Sawing and Drilling Association and explains how to measure texture of a concrete surface using a texture meter. Over the past two years, I had the honour of being the chair of 16 experts in the field of surface metrology, concrete finishing, concrete repair and concrete mix designs representing five major industry associations from ACI, ASTM, ASME, ICRI, and CSDA and representing five continents. The concrete industry’s first standard document for quantifying a concrete surface by accurately reading its texture and assigning the proper designation code or surface texture grade was produced.

This is the first standard of its kind for the concrete industry but not a new standard to other industries. The metal and plastic finishing industries adopted similar standards more than 50 years ago because they experienced the same challenges with interpretation and processing techniques. The standard numerically assigns a texture grading code to the finish so now the design community and end users alike can have a more structured conversation about the quality and sustainability of a polished concrete surface and also determine if steps in the polishing process were skipped or avoided.

The standard covers the possibility of encountering surfaces that contain high amounts of flaw, roll out, voids and how to properly honour these character flaws in the surface and get a reliable reading. ST115 also equips the processor of the polished floor system with a valuable device that enables them to monitor the refinement process of a specific tool in a multiple tooling system process and measure the surface of the concrete after its work has been completed.

This allows the processor to monitor the quality of abrasives being used from the current supplier and provide the ability to compare similar abrasives made by competitive manufacturers and record the resulting finish grade to potentially assemble the best tool selection procedure for particular equipment or process.

ST115 is a very detailed map of surface measurement that will catch any minor adjustment or deviations from the surface. The quantitative surface refinement number is always accurate and does not give results that vary depending on the type of polish guard or sealer that was used. The one thing that will always remain constant and will always remain true about surface finishing is that, any surface that has a high degree of refinement can only produce a bi-product called gloss. It is impossible to have a highly refined floor without gloss. ST115 is not biased, does not take sides, does not allow cheating, and does not favour one polished system over the other, wet or dry, and only reads the real surface.

Used in conjunction with gloss meters and DOI meters, ST115 tells a compelling story about the quality of a finish and changes the current discussions of ‘how long is it going to last’ to ‘how long can it last’. Processes of theory have run their course and the era of not knowing how long a finish is going to last is behind now. Polished concrete is here for good and a cooperative group of industry experts have been assembled and are working to simplify the vocabulary and test methods for everyone to understand it better. Providing more sustainable polished concrete floor systems will be what drives our industry.

Example of a machined surface with character flaw

Various levels of exposure are explained with codes and definitions.

The standard with the surface texture grade and the corresponding value in micro inches and micro metres.

Comparative analysis chart that shows the ST115 surface texture grade and how average polished concrete floors being produced in the industry compare with gloss readings, DOI and grit level.